As the Democratic National Convention begins in Philadelphia on Monday, conventional wisdom is hardening behind this idea: Hillary Clinton is going to be the next president.

That sentiment is driven by a Republican convention last week in Cleveland that showcased not only Donald Trump’s continued inability to stick to any sort of message but also the deep fissures his nomination has created within the Republican establishment.

And, all of that is true. It’s also true that the electoral map clearly favors Clinton and that Trump is on the wrong side of the massive demographic changes sweeping the country. (Trump’s numbers among Hispanics, for example, are horrendously bad.)

But, amid all of that empirical evidence, it’s important to remember that we may be through the looking glass, politically speaking. Meaning that there are bits of evidence everywhere — from Trump’s remarkable run to the Republican nomination to the Brexit vote — that suggest that not only the old way of doing things but also the old way of measuring successes and failures is no longer operative.

Accepting the GOP nomination in the final night of the Republican National Convention July 21, 2016, billionaire real estate mogul Donald Trump offered himself as a “law and order” candidate and made a direct appeal to blue-collar Americans who have felt left behind in the 21st century. (Washington Post)

The truth is Trump shouldn’t even be here. He started his campaign 13 months ago as an asterisk in the polls. He rose on a message that was seen as a nonstarter — the idea of building a wall and making Mexico pay for it. He insulted and bullied his way through the primaries. When the terrorist attacks in Paris and San Bernardino happened, he proposed a temporary ban on Muslims and went up rather than down in the polls. When people started voting, he kept winning — never, really, wavering from his core message that most people are dumb and he is smart.

That Trump won — and did so in such convincing fashion is a telling indication that things, at least in the Republican Party, have fundamentally changed. Trump zigged every time everyone else zagged. And it worked.

The coverage of the general election — and the Republican convention in particular — highlighted Trump’s problems: the plagiarism of his wife, Melania’s, speech, Ted Cruz’s apostasy and the dark vision of American the nominee presented in his acceptance speech. All of which were bad.

Trump’s problems are, unquestionably, legion. Yet, here we are. Two new national polls out Monday either put him ahead of Clinton by three points or tied with the presumptive Democratic nominee. And, it’s not just those two surveys. The broad trend in polling suggests a tightening contest. 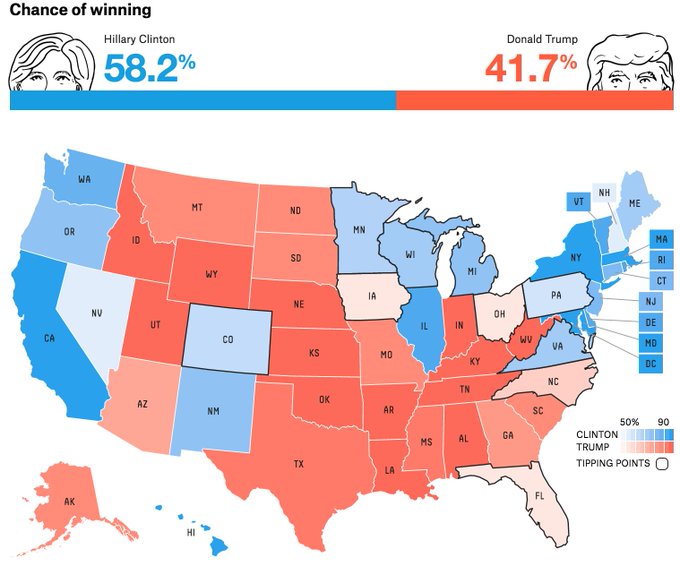 How can this be, many Democrats — and even some Republicans — ask? How, given all of the mistakes, gaffes and other issues that have dogged Trump’s campaign can he be tied or maybe even ahead?

First, see above. All of the rules are off. Assuming they aren’t ignores recent history.

Second, Clinton is a uniquely flawed candidate. She has been in the national eye for a very long time and people have, largely made up their minds about her. It is very hard for her to change those perceptions. What that means is she has a hard and relatively low vote ceiling; no matter what she says or does (or what Trump says or does) there are a rock hard group of people who will not vote for her.

Can Hillary Clinton build voters’ trust at the Democratic convention?

In a binary choice election — which is what this is — Trump benefits from the fact that he is simply not Clinton. What’s happened to date in the race — pre-GOP convention — is that support has peeled off of Clinton but not gone to Trump. Rather, it’s moved to “undecided.” The GOP convention led to some movement to Trump. Hence the tightening in polls.

What this all means is that the race is close today and there’s plenty of reason to believe it will stay like that all the way until the election. For those who say Trump can’t win, you probably said he would have never made it this far. All assumptions need to go out the window in an election like this one. Trump seems to understand that.

Chris Cillizza writes “The Fix,” a politics blog for the Washington Post. He also covers the White House.

The United States will make more medical aid available to India in an effort to fight an alarming spike...