Google, Facebook And Others Can’t Bypass Mukesh Ambani In India

China invokes 1962 war to put India on a defensive. It won’t work

Future of Pharmaceutical industry in India

The environment in a new light

A day after accusing the prime minister of having “surrendered” Indian territory to Chinese aggression, Congress leader Rahul Gandhi on Sunday took a swipe at him saying “Narendra Modi is actually Surender Modi”. He tagged an article in a foreign publication with the headline “India’s appeasement policy toward China unravels”.

However, with the spelling of ‘surrender’ written as ‘surender’ by Gandhi, in no time BJP leaders started talking about it. #SurenderModi became of the top trends on Twitter. Some also opined that Gandhi was playing with words.

BJP chief JP Nadda said, “You say – ‘Narendra Modi is Surender Modi’. That means you are saying that Modi-ji is not only the leader of humans but also of Gods”. 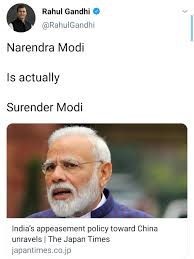 Congress-turned-BJP leader of Assam Himanta Biswa Sarma said, “Mr @RahulGandhi -You’re so exasperated you can’t even spell correctly! And surrendering has been hallmark of Gandhi-Nehru family. In 1962, Assam was almost given away by Pt Nehru. When Chinese Army had captured Bomdila, Nehru said, “My heart goes out to people of Assam.” Shame (sic).”

The Congress leader on Saturday accused Modi of having “surrendered” Indian territory to Chinese aggression, after his remark that neither is anyone inside India”s territory nor has anyone captured its posts, made at an all-party meeting.

“PM has surrendered Indian territory to Chinese aggression. If the land was Chinese: Why were our soldiers killed? Where were they killed,” he had asked on Twitter on Saturday, tagging the prime minister”s remark.

In a statement on the all-party meeting called by Modi on Friday to discuss the situation at the India-China border, the government said, “At the outset, prime minister clarified that neither is anyone inside our territory nor is any of our posts captured.”

The Prime Minister”s Office (PMO), however, said attempts are being made to give a “mischievous interpretation” to Modi”s remarks at the all-party meeting.

The PMO said the prime minister’s comments pertained to the situation at the LAC as a consequence of the bravery of our armed forces, who foiled an attempt by Chinese troops to transgress into the Galwan Valley.

Indian and Chinese armies have been on a six-week standoff in several areas of eastern Ladakh. The ties between the two countries came under severe strain after Chinese military killed 20 Indian Army personnel and injured around 76 in a violent clash in Galwan Valley on June 15.

Emerging market central banks could risk their reputations, sovereign credit ratings and even full-blown economic crises if their bond buying is pursued beyond the...