Hundreds march in India to demand ‘affordable education for all’

On Education, India Follows Finland, England, Scotland. Why Not Motherland?

“It’s becoming harder for rationalism to find space in the public domain,” says D Indumathi, a particle physicist at the Institute of Mathematical Sciences (IMSc) in Chennai. Indumathi was one of the many scientists from the city who, along with students and the general public, walked in the March for Science held at the Elliot’s Beach promenade in Chennai on April 14.

The Chennai march is one of the 200 or so that are happening in cities all across the world. In India, 18 cities, including the metros as well as Tier-II cities like Puri and Bhopal, are participating. One of the objectives of the march is to “stop [the] propagation of unscientific, obscurantist, out-dated ideas”.

S Thilagar, Vice-President of Breakthrough Science Society, the NGO which is organizing the marches in India, says, “There is a systematic campaign by the government against Science. A minister is actually speaking against an established scientific fact like evolution.”

Thilagar was referring to an incident early this year when Minister of State for Human Resource Development (HRD) Minister Satyapal Singh questionedDarwin’s theory of evolution. His comments were dismissed by Union HRD minister Prakash Javdekar later, but Satyapal has since also gone on to claim that ‘mantras’ had codified the laws of motion, before Isaac Newton came up with them.

“My children are in school and I want them to learn real Science, not the benefits of cow urine,” said Jayanti Srinivasan, a homemaker who had come for the march with her entire family. Last year, the Central government set up a 19-member panel headed by Union Science and Technology Minister Harsh Vardhan to scientifically study panchgavya – a mixture of cow urine, cowdung, milk, ghee and curd.

About a month ago, Harsh Vardhan also falsely claimed that Stephen Hawking had said the Vedas had a theory superior to Einstein’s famous e=mc2 equation, which explains how energy can be converted to mass and vice versa.

One of the demands made in the march is increasing funding for scientific and technological research to 3% of the Gross Domestic Product, from the present 0.8% that it has remained at for the past decade.

In this year’s Union Budget, funding for departments related to scientific research has been raised by 11%, but this is not enough say scientists. 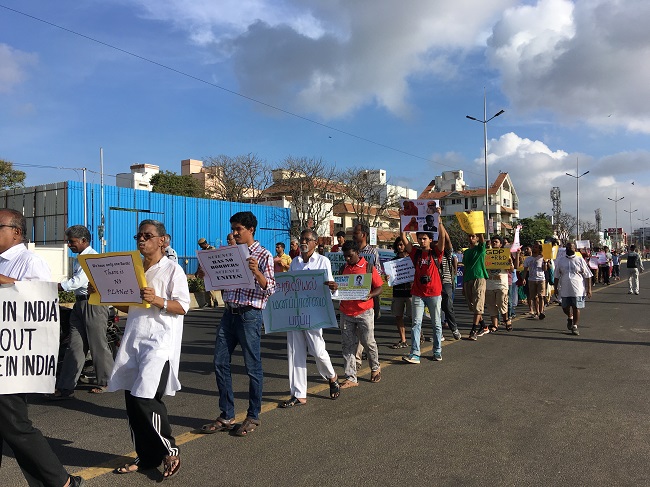 “It sounds like it has increased, but it will be offset by inflation,” says TR Govindarajan, a retired professor from IMSc.

S Ramanan, 80, a mathematician who currently teaches at Chennai Mathematical Institute, says that increasing funding was essential because Science has become more complicated and expensive. “We only have the capacity to do common-sense Science now. Simply doing technological research isn’t enough. We need to do more sophisticated scientific research to broaden our understanding of the world.”

Indumathi too agrees that Science had become more complex now. “Because of this, it’s becoming harder to communicate concepts to the common man. The atmosphere is becoming more vitiated now.” She also feels that scientists needed to make more efforts to reach out to people.

Indumathi has also been involved with the Tamil Nadu Science Forum, which works with grassroots educators.

The education sector is need of reform, according to the marchers. One of the demands made was to increase funding for education to 10% of the GDP, from the 3% that it’s at now.

Yashodhan Manerikar, a second-year student at IIT-Madras, says, “Despite being a leading institution, our labs still have technology from the ’90s. We’re making observations and plotting graphs by hand. In the real world, there are computers to do that.”

He also felt that there wasn’t enough encouragement for original research. Most PhD research, according to him, was only to confirm existing research. His senior, Tanmay Kibe, a fourth-year Physics student, however, felt that this wasn’t a problem: “There need to be multiple studies to confirm a hypothesis. What I’m concerned about is practices like homeopathy being followed despite extensive evidence that it doesn’t work.”

Govindarajan feels that students at premier institutes didn’t have it as hard as smaller colleges. “I’ve visited colleges where students have been asked to bring their own test-tubes and chemicals,” he says.

At the end of the march, the list of demands was signed by those who had gathered. It will be presented to the Governor of Tamil Nadu, who will then forward it to the Prime Minister. The initiative has been supported by personalities like MS Swaminathan, a Padma Bhushan awardee, and Padma Shri awardee M Anandakrishnan.

India participated in the march for the first time last year on August 9, a few months after the global march on April 22. Organizers said that it was to show solidarity with scientists in the West, who faced funding cuts after President Donald Trump came to power in the United States.

The United States will make more medical aid available to India in an effort to fight an alarming spike...