Tamil Producer to File Case Against Parasite Makers for Plagiarism

Disney+ to launch in India through Hotstar on March 29

Who is Gunja Kapoor: Woman who donned burqa to enter Shaheen Bagh protest

The launch of Fit India movement on National Sports Day will be telecast live on Doordarshan and will be simulcast on social media platforms YouTube and Facebook.

Prime Minister Narendra Modi will on Thursday launch the “Fit India Movement”, a nation-wide campaign to encourage citizens to take up physical activity and sports in their daily lives. The launch of Fit India movement on National Sports Day will be telecast live on Doordarshan and will be simulcast on social media platforms YouTube and Facebook.

Here’s what you need to know about the Fit India Movement:

* The Prime Minister will administer a fitness pledge in his address, inviting all Indians to join in, and launch a fitness logo at the Indira Gandhi Indoor Stadium in New Delhi.

* The Fit India Movement will be a “multi-ministry effort”, including the sports, HRD ministry, panchayati raj, rural development ministries, aimed at bringing about behavioural change and introducing basic fitness practices in the daily lives of Indians, a majority of whom lack access to sports or fitness infrastructure in their neighbourhoods.

* A special focus of the campaign will be on rural India that lacks basic facilities to improve physical well-being and awareness of fitness. 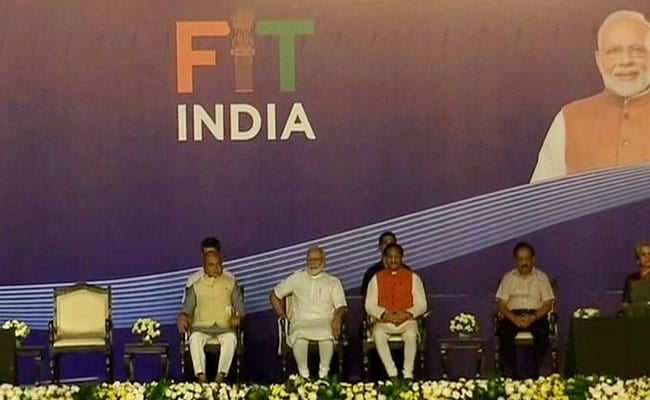 * Awareness programmes through involvement of celebrities, sports activities undertaken in tier 1 and 2 cities, and other such events are being planned during the campaign. This will also be used to promote Yoga in a big way.

* The University Grants Commission (UGC) has asked affiliated higher educational institutes to prepare and implement an institutional fitness plan incorporating sports/exercises/physical activities for fitness, into the daily routine. The commission has also asked institutes to encourage every person to walk 10,000 steps.

* They have also been told to upload their fitness action plans on UGC’s “Fit India Movement Portal” which is under development.

* The 28-member committee, under the chairmanship of sports minister Kiren Rijiju, has 12 members from the government, including secretaries of sports, secondary education, AYUSH, youth affairs, among others.

* IOA president and seven NSF heads, including those of boxing, athletics, football and cycling, are also a part of the committee.

Tamil Producer to File Case Against Parasite Makers for Plagiarism

Gujarat college girls were allegedly forced to strip by the administration to check if they were menstruating. The action...