Deadly Triangle: Afghanistan, India, and Pakistan After US Withdrawal

Normandy: A Window to sooth the Soul

(Brussels 9/4 – 33.33).        In early February 2021, Margarita Simonyan, head of the Russian disinformation outlet RT.com, called upon the Russian leadership to violate(opens in a new tab) the country’s obligations to international law, bilateral agreements and human decency:

Mother Russia, represented by the official spokespeople of the Kremlin(opens in a new tab) and Russia’s ministry of foreign affairs(opens in a new tab) quickly distanced themselves (and Mother Russia) from Ms. Simonyan’s pathos. While Simonyan is State employed manager and had the appeal broadcast on a State financed and controlled channel, the words were nothing but her own views. Not Russia’s policy on annexing neighbouring countries.

The Russian federation moves its Armed Forces within its own territory at its own discretion. This should not worry anyone; this is not threatening anyone.

Ms. Simonyan, the editor-in-chief of RT and Sputnik, views her outlets as the Russian state’s weapons for an information war. Her call to “bring Donbas home” can be viewed as a first step to prepare the information space. Parts of a neighboring country, recognized by Russia in international and bilateral agreements, are defined as “Russian”. Similar 2021 cases from the EUvsDisinfo database here and here. The people of Donbas is described as Russians, unjustly anguishing under a foreign yoke. Russia is their true “home”.

Ukraine is Preparing a Genocide!

The pro-Kremlin disinformation ecosystem uses the term “genocide” rather generously, and rarely in line with the internationally recognized definition, in article two of the Convention on Prevention and Punishment of Crime of Genocide(opens in a new tab), approved by the UN General Assembly in 1948. Almost any measure taken by a sovereign Ukrainian government on securing constitutional order could be “genocide”. Russian politician, former speaker of the Parliament’s upper house, Sergey Mironov, claimed (opens in a new tab), for instance, that the removal of a Soviet war monument in Estonia in 2007, was an “act of genocide against the Russian people”. Now, Ukraine is performing “acts of genocide against Russian compatriots in Ukraine”. Examples here and here. Usually as a stooge for the West. We see such a claim from Russian state TV here; state news agency RIA Novosti’s website Ukraina.ru here and state-owned broadcaster Sputnik here – all in less than a week. 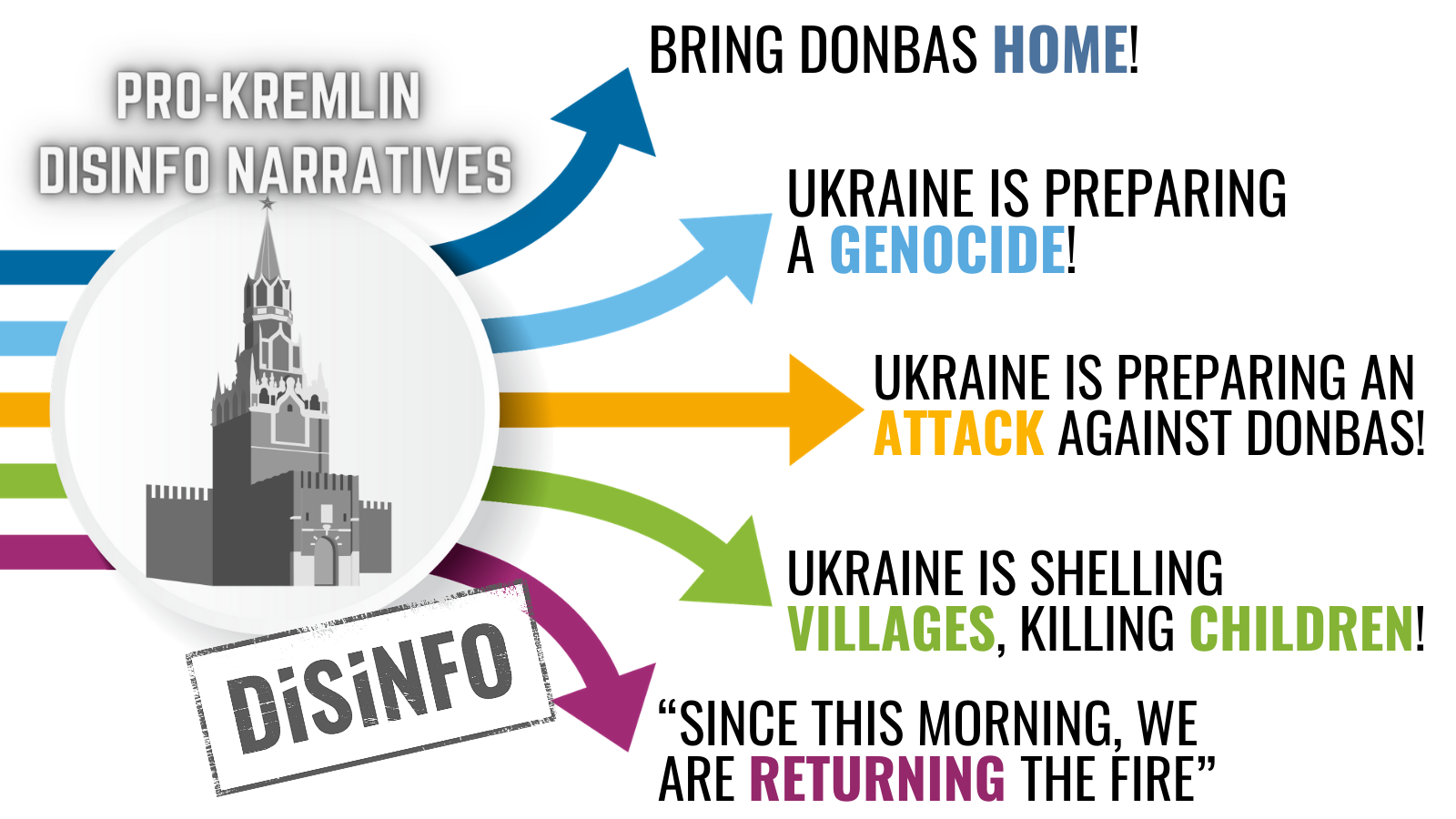 Ukraine is Preparing an Attack against Donbas!

Now, the term “genocide” is, apparently, used as the Kremlin disinformation outlets’ equivalent of “deeply concerned”. A stronger wording is an imminent attack. Russian state and nationalist media have been full of claims of Ukraine, massing up for a military operation against Russia-controlled parts of Ukraine. Examples here and here. Usually, Ukraine is pushed against Russia by outside forces – the US, NATO, Turkey. Nationalist outlets are sharing with great detail(opens in a new tab) but scarce sources Ukrainian plans on an offensive against the ”peoples republics of Donetsk and Luhansk”:

NATO countries are moving military vehicles to Ukraine. This information has appeared on Internet; users are sharing screenshots showing transport aircraft from sites, following air traffic. According to such sources, a Lockheed Martin C 130J transport aircraft, belonging to the US Air Force has taken off from the Ramstein airbase in Germany and landing en-route in Seville in Spain for tanking. Later, a second C-17 transport aircraft landed at Kyiv.

The false statements are getting more and more detailed; the resolution of the false image becomes greater. The victim of the alleged Ukrainian aggression is no longer the abstract collective of “Russians in Donbas”, but individuals with names – and age(opens in a new tab):

A cynical, premediated, unprovoked, disgusting murder. 3 April, four year old Vladik Dmitriev was killed by an improvised explosive device, adhered to a drone. He ran out in the garden with his toys to play, while his grandmother lagged behind, putting on her shoes. That is why she remained alive and could hear the explosion.

The only thing the experts discuss is whether the device actually was a IED and not a real, factory made piece of ordnance of Western production.

An innocent child, killed in war. A tragedy. A crime. Highly emotional reporting circulated across the Russian state-controlled media and used by the speaker of the Russian Duma to demand the discussion of excluding Ukraine from the Council of Europe.(opens in a new tab)

The Liberals, who do not believe in the tragedy with the Ukrainian being responsible for the death of a boy, do not understand how dangerous the situation is when they are “preparing the agenda” on the instructions of NATO.

This approach is similar to the infamous “crucified boy” story the pro-Kremlin media spread back in 2014, to incite hatred against Ukrainians in Russian domestic audiences, and justify its armed aggression against Ukraine.

Gradually, the audience is prepared. The people of Donbas must come “home to Russia”. Ukraine is violating the rights of Russians, by a cruel fate appearing in a foreign state. Ukraine is killing children; opposition figures in Russia sides with NATO. Russia must act!

Deadly Triangle: Afghanistan, India, and Pakistan After US Withdrawal

Normandy: A Window to sooth the Soul